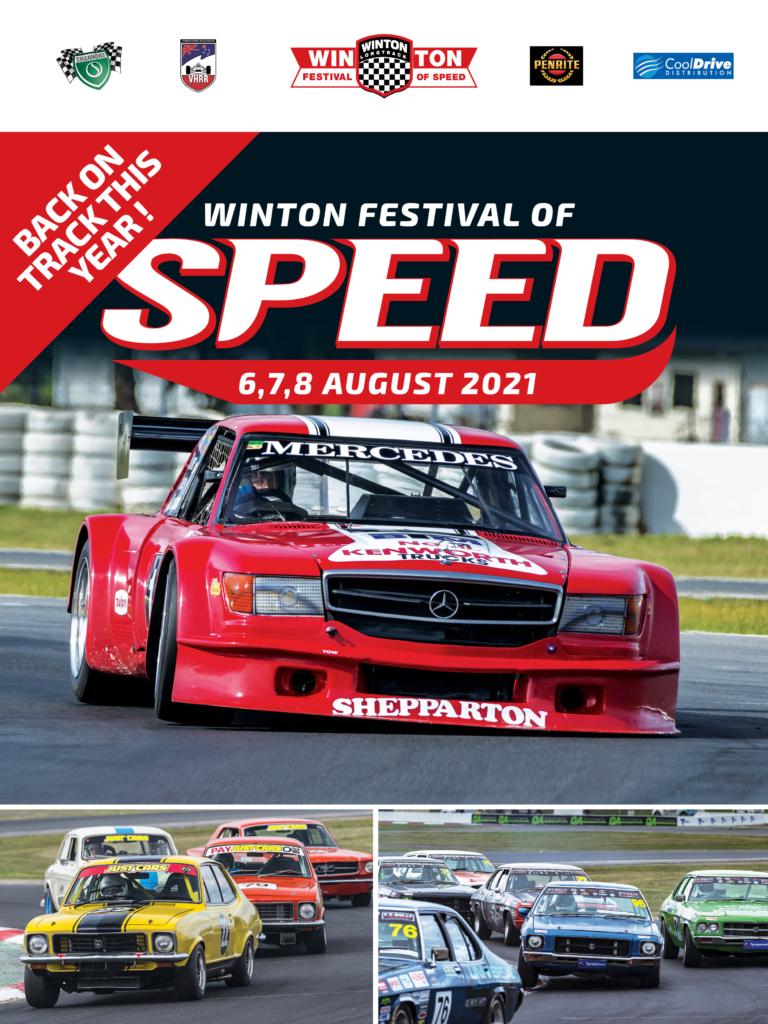 Over 500 cars racing and on show over 2 days, featuring the Just Cars 50kms Historic Touring Car race. Classic Sports Car races, Super Sprints for Group C & A and Tribute Cars, plus Historic Sports Sedans. Celebrating the 50th anniversary of the HQ Holden and 50 years of the Marque Sports Car Associate of Victoria (MSCA). 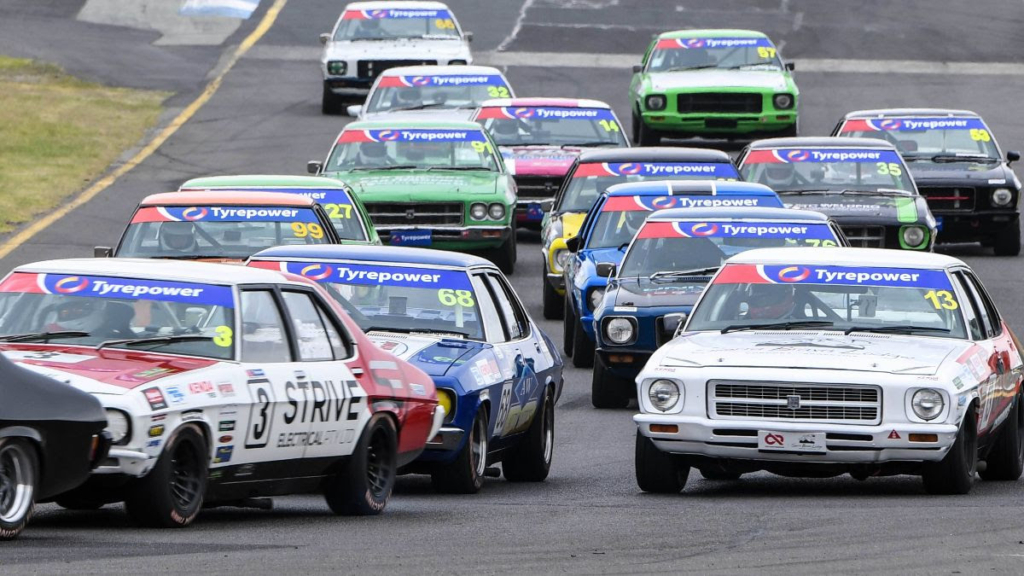 Celebrating the 50th Anniversary of the HQ Holden

The HQ Holden was released on 15 July 1971 and with more than half a million vehicles produced up until Oct 1974, it is undoubtedly one of Australia’s most iconic vehicles. A staggering 18 model variants were produced at GMH plants in Elizabeth (SA), Dandenong (Vic), Pagewood (NSW) and Acacia Ridge (Qld), while engines, transmissions, and final drive assemblies were produced at Fishermens Bend in Melbourne.

While Holden’s factory supported racing program switched to the smaller six cylinder Torana in 1971, a handful of Monaros and V8 Kingswoods were built for racing, including Malcom Ramsay’s Repco Holden F5000 engined Improved Production touring car. But, with HQ’s a relatively rare sight on Australian race tracks in the 70’s, nobody could have foreseen how dramatically that would change over a decade later!

The “HQ racecar” was developed in Tasmania in the late 1980’s and quickly spread to the mainland. The basis of the vehicle is the HQ Holden six cylinder three speed manual, four door sedan. Strict technical regulations ensure that all cars are presented in the same manner, and that all competitors compete on equal terms.

The sustained success of HQ Racing can be attributed to the broad appeal of the iconic HQ Holden and the affordable, close, action packed racing that the category has become renowned for!

As we celebrate the 50th anniversary of the HQ Holden, we guarantee the longest running one-make series in Australian motorsport history, will produce some of the closest, most exciting racing you’ll see at the 2021 Winton FOS.

The idea behind the Super Sprint is to encourage competitors with tribute cars to enter as one class taking the faster cars away from the traditional regularity cars and open the field to C&A cars who wanted to compete in a non-championship event. The VHRR has acknowledged the growing trend of Tribute C&A Cars competing in its regularity events and with many more currently under construction.

Amongst the Tribute Cars are regular Victorian competitors in Neville Kettles and his now updated VH Disco Sound Waves Commodore, and Graeme Stevenson and his Alan Moffatt XC Falcon Hard Top Coupe with further Interest coming from South Australian Larry Kavanagh in his ex – HDT Promo VC Commodore and competitors from as far as NSW and Queensland had made contact including the Steve Blaxland with his Dick Johnson Greens Tuff XE Falcon.

Group C&A interest has come from competitors such as Craig Bowring with the Warren Cullen A9X 4 Door Torana, Milton Seferis in the Peter Janson VH Commodore, Ian Ross and the Mike Imrie XD Falcon as well as Tony Sawford and his Alan Grice Torana A9X Hatchback.

50 Years of the Marque Sports Car Association of Victoria (MSCA)

The MSCA is highly-regarded for running efficient, safe and friendly events, including an award-winning Come and Try Program offered in Victoria and South Australia. Focusing on grassroots motorsport, our sprints regularly attract more than 100 entrants, competing in a wide variety of cars.  We run 10 sprint events each year which are held at Sandown, Phillip Island and Winton.

This year, the MSCA is proudly celebrating 50 years of motorsport.  As part of our anniversary celebrations, our Marque cars will be sprinting at the 2021 Winton Festival of Speed, showcasing the diverse club base that represents the MSCA. 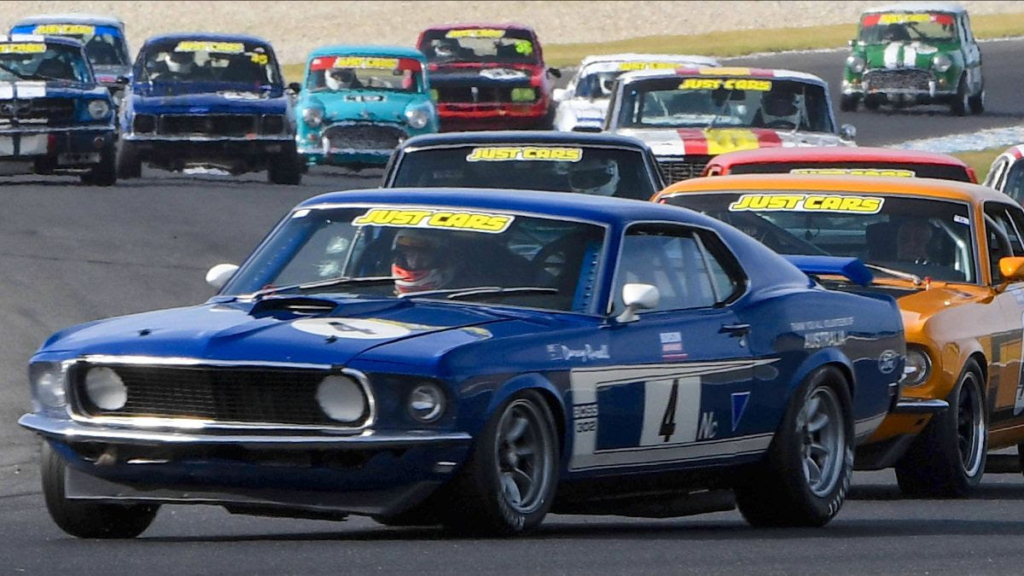 The Winton Festival of Speed is a premier event for historic touring cars in what looks like a looks like a vintage year for the category. Expressions of interest from around the country began last year, particularly from the growing percentage of competitors the front end of the grid. The 50K feature race is a tremendous drawcard, not only for the big bangers but also the swift middle-order cars that fancy themselves over the longer distance at a track like Winton where brake and tyre wear can take their toll.

Interstate interest includes that from Darryl Hansen in his newly built Fastback Mustang, together with his son Matthew in the familiar gunmetal 302 ’68 Mustang, and Queenslanders Craig Allan and Ian Mewett in their twin Fastback Mustangs. They will do battle with Victorian Fastback drivers Michael Miceli and Andy Clempson, locals Tony Hubbard in his Monaro and Dom Leo in his newly acquired 68 Mustang and the rapid 68 of Geelong’s Chris Stern. The Valiant Chargers of Les Walmsley and Rob Burns will fly the Mopar flag, Elliot Barbour and Nathan Gordon are very likely to add their quick Toranas – and that’s just the start.

But the biggest threat to big car domination will come from the Mazda RX2s. NSW’s Jason Humble is coming with Alan Mayne and Steve Shepard also likely, while quick Vic rotarians Peter McNiven and Wayne Rogerson will take the Mazda push right up to every car on the track. Down through the capacity classes the BDA and Twin Cam Escorts, BMWs, Minis, Cortinas and more won’t back away from their private stoushes.

As a featured category the tourers will be there in force and on song – the Just Cars Touring Cars can’t wait.

Motorkhanas are motor sport events designed to test the acceleration, braking and handling of cars and the skill and judgment of drivers. Most importantly, motorkhanas provide fun and enjoyment whilst practising and learning car control. Oversteer and understeer will be found in abundance, but at safe speeds under controlled conditions. Fastest time wins, with penalties applied for hit markers or wrong direction. Classes are based on wheelbase and engine location relative to the driven wheels, along with 4WD and Special built vehicles.

Two tests are typically contested simultaneously, with up to 12 tests for the day, which may include reversing elements within the test, or they may be a mirrored layout to really test the memory. Surfaces can vary from grassy paddocks to dusty fields, and hard surfaces of concrete or asphalt.

Motorkhana is a great discipline of motorsport to get juniors started from age 12, and a Masters category for the over 65. Three generation families can all compete in the one car, to see who is the fastest member of the clan. Motorkhana has one of the highest female participation rates of all motorsport disciplines. Many husbands and wives, or siblings, battling it out for supremacy.

Saturday will be a round of the Group5 NonSpeed Championship. Group5 is a collection of car clubs that run various motorsport events. Clubs involved are Ford Four, Toyota, Nissan, Mini, Huntingdale, Holden Sporting, Pakenham, Western District and PIARC, but not limited to.

Sunday will see Round 7 of the Victorian Motorkhana Championship, where a few more marque and regional clubs will attend. 50 entries are anticipated on each day, with passenger rides to be available with sign up at the skidpan, pending Government COVID status in August.

Each days competition will start by 10am to conclude by 4pm at the Winton Skidpan.

Winton Motor Raceway is a 3.0km circuit in national configuration and a 2.03km circuit in Club configuration located near Benalla just off the Hume Highway, Victoria. The circuit has been established for over 40 years and host Motorcycle, Motor Car and Superkart racing as well as having vehicle product testing facilities. If you have any queries regarding Winton Motor Raceway, email race@wintonraceway.com.au