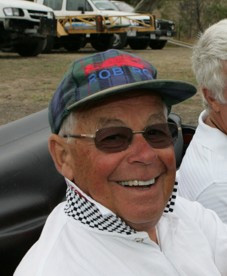 “For service to the community through public speaking programs and a range of executive roles with charitable, child health care and educational support organisations.”

Don originally qualified and worked as a Mechanical Engineer; he joined Radio 3DB/HSV7 in 1956 as a broadcaster, later as senior executive. In 1976 he became Public Relations Director at the Royal Children’s Hospital – a position he held for 20 years until his retirement in 1996. In 1972 Don founded “Communicators Melbourne” – a business in which he conducted and continues to conduct courses in effective public speaking and business presentation.

He has been interested in motor sport since a young man as a spectator, driver and commentator for historic and vintage motor sport. He has acted as commentator on historic motor racing at the Australian Grand Prix, Phillip Island Historic Race Meeting, at hill climbs at Rob Roy, Winton and various other vintage race meetings and hill climbs throughout the state.

His first car was an Austin 7 followed by a Riley 9 and a Mark IV Jaguar etc. etc. Competed in trials, sprints gymkhanas etc. A7 Club, Sporting Motor Club, PIARC

A Foundation Director of the Mazda Foundation in 1990 he remained as a Director until 2005.

Don is not a Rotarian, but in 1989 he became adjudicator of Richmond Rotary Club’s Secondary School Public Speaking Awards, a position he still holds.

For over 30 years a voluntary advisor to the Uncle Bob’s club, which has helped to raise so much money for the Children’s Hospital over those years. The Club recognised this contribution by making him Patron.

Don presents training lectures to the volunteer guides at the Shrine of Remembrance and acts as master of ceremonies at various ceremonies associated with the Shrine.

Don has been involved with Royal South Street Society and for many years. He has chaired the finals of the Herald/Sun Aria competition on a number of occasions.

Since 1957 Don has been involved in various functions for Legacy, including the Junior Public Speaking Awards programme and the Children’s Service at the Shrine prior to Anzac Day

When Don joined 3DB, like many other members of the staff, he became involved with the Good Friday Appeal. The service given by the staff at 3DB and HSV7 to the Good Friday Appeal is completely voluntary and unpaid and Don’s service to the appeal continued for 40 years. He has also given up much time on many Christmas Days to be with the children at the hospital, again free and voluntarily.

The VHRR is proud to be associated with Don & congratulates him on his honour.