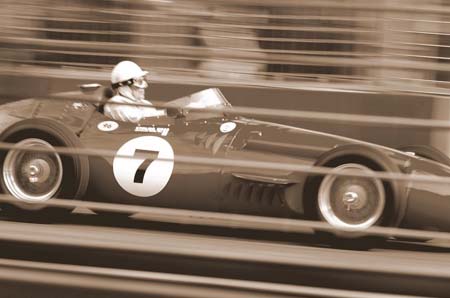 Posted at 05:44h in Event Review by vhrr

The 2006 Formula One Fosters Australian Grand Prix hosted an historic celebration over its four days of action.  This year’s instalment marked the 50th anniversary of Sir Stirling Moss driving a Maserati 250F to victory in the 1956 Australian Grand Prix, held at the same location as its modern equivalent, Albert Park Lake.

As always for the modern Grand Prix, Sir Stirling played his own part in the demonstration, run this year by Repco, driving a Cameron Miller 250F owned by American Peter Giddings in the “Australian Grand Prix tribute” group.  The cars in this group participated in the races at Albert Park in the 50’s, albeit on a different, and anti-clockwise, layout.  Peter Giddings, a respected international steerer, also thrilled the fans by displaying his original factory 250F, the very car that Sir Stirling drove to victory in that 1956 event.

These two Modenese marvels were further complimented in this group by a relative of theirs from an older generation- Dr Ian Butler’s supercharged 4CL, a common site on the race tracks of  1940’s Europe.

Lending more variation to the line up was Victorian Frank Moore in his Cooper, formerly powered by a Repco motor, but now grunting to the tune of a Chevrolet V8.  It was one of a host of locally modified specials in the demonstration. Another car following the same philosophy of light weight and big-cube engine was a very special Allard J2 driven by Graham Smith.  This car once recorded fastest time of day at the Rob Roy Hill climb back in 1951.

Highlights in the other categories included Le Mans winner Vern Schuppan driving his own 300SL Gullwing Mercedes, along with two very special fifties Ferrari Sportscars, the 212 of the Dutton family and Peter Harburg’s 750 Monza. Not to be outdone, Jaguar was represented by 2 D-Types, an ex-Hamilton machine for Warren Daly presented alongside a similar machine that appeared at Albert Park in the cars prime, now piloted by Keith Berryman. The energetically driven Aston DB4 GT of Ray Delaney mixed it with a gaggle of 100 series Austin Healey’s and various local single seaters, including the interesting combination of pre-war the Watson’s Bugatti complete with Holden engine!

Event sponsor Repco also featured amongst the entries, 3 sportscars being powered by Holden engines fitted with the Repco “High-Power” heads and being encased in exotic bodywork.  The Ausca of Ian McDonald, along with the Monza of the Sala’s and the MM Special of John Anderson proved that local engineering has its place amongst the exotic overseas machines.

For this year, the display area was modified from years passed. Where once the cars were nuzzled under a large canopy, this year the layout was more open and rustic in feel.  Smaller covers kept them out of the worst of the weather, the cars set out in rows with open sections between them, allowing spectators room to move.  Hay bales and the old fashioned Start-Finish banners contributed to the authenticity of the atmosphere.

Whilst only a demonstration run, many of the drivers revelled in the chance to test their cars out on the 16 turns that shape Albert Park.  A chilly and drizzly Saturday morning was quickly forgotten as Sir Stirling and Peter Giddings spun the wheels of their irreplaceable mounts, flicking corrective lock on the exits of sharper corners.  All through the field one could see how alive these cars still are, despite their advanced age.  They are from a time where a driver required finesse and a delicate sense of balance, coupled with a degree of mechanical sympathy.  It was a pleasure to see them in action again.