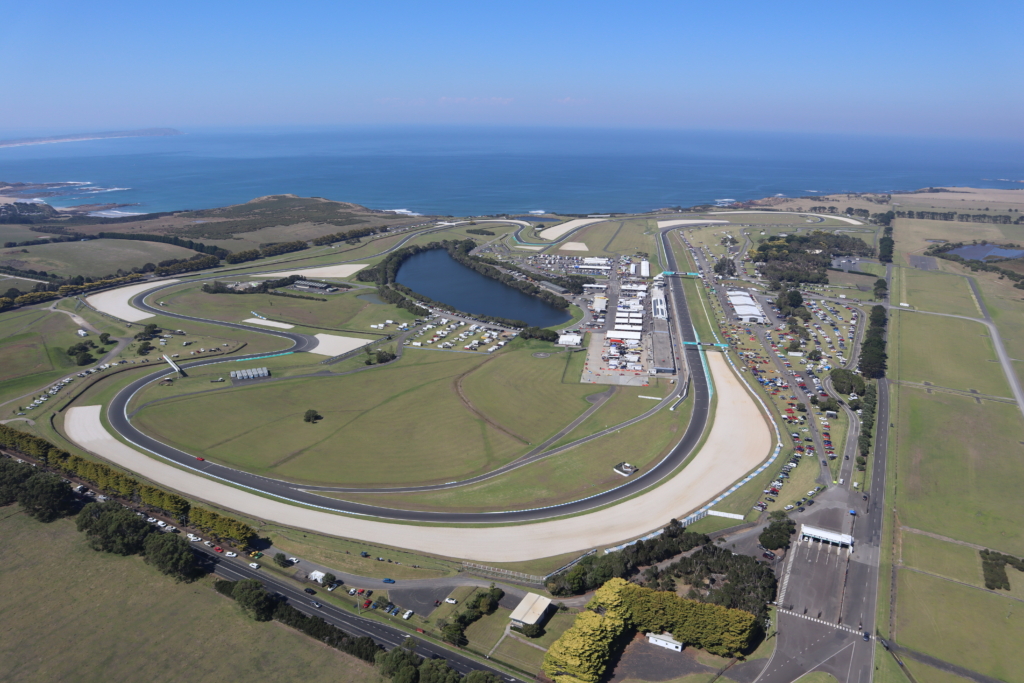 The Phillip Island circuit is two and three-quarter miles of flowing race track in a truly picturesque setting with the ocean as its backdrop. The Victorian Historic Racing Register (VHRR) once again staged the biggest historic event in Australia, its March Phillip Island Classic Festival of Motorsport, this time without the COVID restrictions that banned spectators in 2021. There were no international cars due to shipping difficulties, but 450 entries as received provided interesting fields across a wide range of categories from the Australian favourites, 5 litre V8 Touring Cars, through to a field of fifty-seven Formula Fords. This huge field included three overseas drivers, Richard Tarling from the UK , Gislain Genecand from Switzerland and Xavier Michel from France to do battle with the locals for The Perkins Cup, named to honour the Australian Perkins brothers, Larry and Terry who both won the Australian Formula Ford title in the nineteen-seventies before going on to success in Europe. The International drivers enjoyed great success with Gislain Genecand winning the Formula Ford outright with Richard Tarling seventh and Xavier Michel eleventh in a 57 car grid. The Don Kinsey Encouragement Award for Young Drivers went to 16 year old junior member, William Sala driving a 1975 Elfin Formula V and winner of the Q &amp; R F5000, F1, Indy Cars and Invited, was won by Guido Belgiorno-Nettis in his 1985 Ferrari 156/85. In Saturday’s race the Guido was challenged closely by 2nd place winner Grant Doulman in a 1988 Shrike NB89H although Guido stretched the margin out in Sunday’s final race. Q & R Sports & P ; Invited was won handsomely from start to finish by Thomas Tweedie in a 1974 Elfin MS7 who wasn’t seriously challenged over the three day event. Larry Perkins and his son Jack were at the Island to race Holden Commodores in the Australian fans’ favourite category, the 5 litre touring car races. Following his successes in Europe, Larry became a local legend in touring cars and the seventy- one-year-old, six-time winner of the Bathurst 1000-kilometre race, was enjoying the relaxed atmosphere of historic racing. Jack was the outright winner of this spirited challenge.

Andy Newall was the fourth overseas driver to make the trip down under. Unfortunately, Andy’s borrowed McLaren M6B suffered a hub failure on Friday so he missed racing on the weekend. The single seater event for cars from the seventies through to the nineties provided the fascinating sight of famed racing car designer Malcolm Oastler in a Ralt RT1 dicing with a Reynard 92D, a car he designed. After following the Reynard for a number of laps Oastler edged his 1600cc Ralt past the three-litre car taking fourth place in the Sunday morning race. Perhaps the Reynard driver, Duncan MacKellar sought out Oastler after the race to ask his advice on setting up the Reynard. The winner of the Sir Jack Brabham Trophy for Driver of the Meeting was Nick Bennett who raced in two categories and achieved 3 outright wins in Class M & O Sports Racing driving a 1970 Elfin TC-W 600B. Three days of historic racing in the sunshine was the perfect way to blow away the COVID blues of the previous two years. Many of the spectators took the opportunity to drive their special cars to the track, with car clubs providing displays in the vast area overlooking the main straight. Hopefully next year some international cars can add further interest to the VHRR’s impressive event.

With some 435 entrants from all states of Australia, except WA due to COVID restrictions, the Phillip Island Grand Prix Circuit will once again be the home for spectacular historic racing over Victoria’s long weekend of 11-13 March. Although there is an absence of international historic cars this year as a result of the pandemic, four overseas drivers including Richard Tarling from UK , Gislain Genecand from Switzerland and Xavier Michel from France will each be driving Formula Fords whilst Andy Newall from the UK will be racing Bob Harborow’s 1966 McLaren M6B. With maximum grids in a number of categories, especially the Formula Fords where 57 FA, FB and FC cars will be racing on Sunday morning and afternoon for the prestigious Perkins Cup. This field includes Tim Blanchard, Team Principal of the Blanchard Racing Team. Tim’s father, John Blanchard will not be racing due to an injury and his seat in the Formula Ford will be filled by Brian Soule, Maximum grids are also registered in the Group S Sports Cars and 66 cars in the Regularity racing plus other categories, once again confirming the importance of this event on the Australian and International Motorsports calendar. The 50 th Anniversary of Peter Brocks famous 1972 Bathurst Win in a Torana XU1 will be celebrated with a grid of eleven cars from Queensland, South Australia, NSW, Tasmania and Victoria each racing for the Peter Brock Trophy on the Sunday. Of particular interest this year will be a field of more than 30 – 5 litre Super V8 Touring Sprint cars built between 1993 and 2002 and invited high speed cars. This field includes the highly competitive Larry Perkins driving the Castrol BZ Commodore and his son Janck driving the ex HRT V8 Super Car that he drove at Bathurst. Throughout the event Michael Stillwell will act as Driving Standard Advisor with Event Director Ian Tate OAM and Clerk of the Course Michael Herlihy.

“Not only will spectators be treated to spectacular racing on the Friday, Saturday and Sunday but under the direction of the VHRR, 270 cars will be practicing on the Thursday and spectators are also welcome on that day,” said Event Director Ian Tate. “There will be a strong media presence including interest from international publications including the UK publication Classic and Sports Car Magazine confirming the international status of the Phillip Island Classic-‘Festival of Motorsport’ race meeting,” he said. ENDS 24 February 2022 For further Information: Ian Tate OAM Chairman VHRR Phillip Island Race Committee, President VHRR &amp; Event Director Email: tatehistoricracing@gmail.com Mobile: 0458 882 304 Graeme McLean Graeme McLean &amp; Associates Pty Ltd Email: graeme@mcleanassoc.com.au Mobile: 0438 806 090

Over the long weekend of March 11-13 the Phillip Island Classic ‘Festival of Motorsport’ will once again become a major Victorian attraction at the Phillip Island Grand Prix Circuit with more than 400 spectacular historic vehicles from the early 50’s to the late 80’s racing.

Organisers of the event, the Victorian Historic Racing Register (VHRR), supported by long time sponsors, CoolDrive, Penrite and Shannons, have confirmed that along with the 400 entries for the three day event there will be some 240 entrants practising at the Island Grand Prix Circuit on the Thursday this year under the direction of the VHRR.

Throughout the weekend there will be a series of special races including a commemorative race for the XUI Holden marking the 50 th Anniversary of motoring legend Peter Brock’s 1 st win at Bathurst in 1972. Special guest, Bev Brock, will be at the circuit to present the trophy to the winner of this event.

Two feature races will be held on the Saturday for Q & R Racing and QR Sports categories including Guido Belgiorno-Netti’s spectacular 1985 Ferrari 156/86 F1. 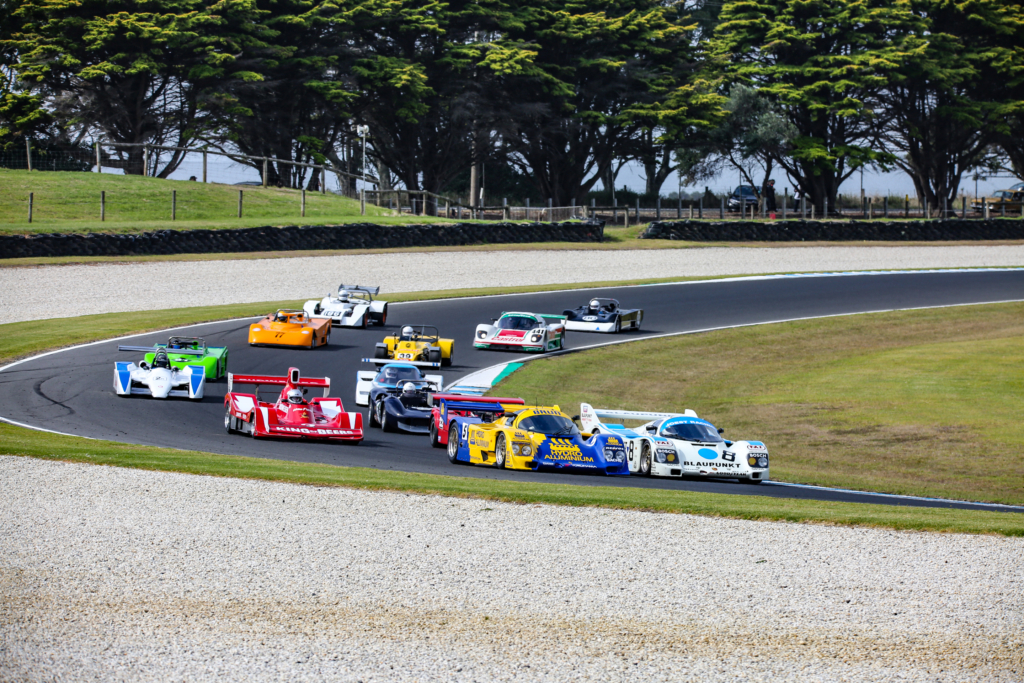 Feature races over 12 laps on the Sunday will include Q & A Touring cars, Group S Sports Cars and Touring cars over 2 litres. Australian Champion Larry Perkins will race against son Jack for the first time in the Super Special in a capacity field of 30 cars.

Some 56 Formula Fords will also grid up for two feature races on the Sunday to compete for the Perkins Cup.

The weekend promises to be a welcome return to exciting racing in what is regarded as the largest historic racing event in the Southern Hemisphere with past and present champions of the sport.

Tickets for the weekend of spectacular historic motorsport will be available at the circuit gate.

Camping: Camping at the circuit will not be permitted.