Posted at 22:45h in Uncategorized by vhrr 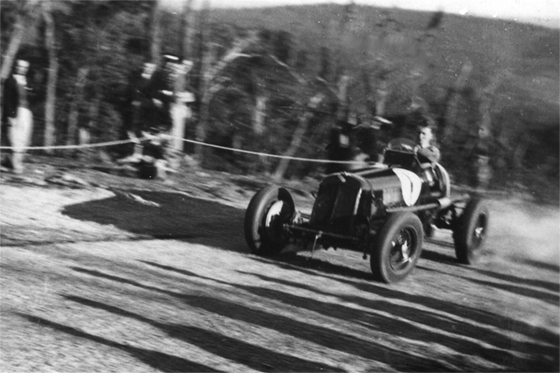 80 years of Rob Roy – a snapshot
The first Rob Roy Speed Hillclimb was held on 1st Feb 1937 and FTD was taken at that meeting by Jack Day in the Day Special with a time of 37.39 seconds – the times have come down a long way since then, with Andrew Howell’s long standing record of 17.30 – set in 2009 (also, as it happens, on the 1st of February).
Rob Roy is where the the first Australian and Victorian Hillclimb Championships were held – both on June 13th 1938. This event was won by Peter Whitehead in ERA R10B. Whitehead set FTD and a new record of 31.46 seconds – in those days the track was unsealed.
The track was bituminised in 1939 – at that time sharing the distinction, with Shelley Walsh and Prescott, of being the only specially designed, bitumen surfaced, hillclimbs in the world.
Prior to it’s closure in 1962, due to bush fires, eight of the record holders had also been Australian GP winners – including Sir Jack Brabham, Lex Davison, John Crouch and Peter Whitehead (UK)
This year also celebrates 25 years since the MGCC resurrected the hillclimb. The Victorian Historic Racing Register (VHRR) and Vintage Sports Car Club of Victoria (VSCC), as promoting clubs, have also both been involved with Rob Roy over the last 25 years.
Rob Roy has hosted 9 Australian Hillclimb Championships – 1938, 1947-1953, and 1958.
Whilst the Australian Hillclimb Championship is no longer held at Rob Roy, rounds of the Victorian Hillclimb Championship are with the latest round being held on 22 January this year, where 2015-16 Victorian Hillclimb Champion, Gary Martin, took out FTD with a time of 19.90 seconds (there have ever only been 8 drivers under 20 seconds).
Come and Celebrate
The three promoting clubs (VHRR, VSCC and the MGCC) hope you will help celebrate the 80 years of Rob Roy hillclimbing during the year, either as a competitor, spectator or with your car on display at the events listed below.
Early Rob Roy Hillclimb Vehicle/Display vehicles/Spectators
EARLY ROB ROY HILLCLIMB VEHICLE – if you have or know of anyone with an early Rob Roy hill climb vehicle could you please contact Mike Barker 0407 825 545 or mikebarker2@icloud.com . We are looking for competitors and / or display cars to add to the spectacle of our event on the 7th May.
DISPLAY VEHICLE – As with early Rob Roy hillclimb vehicles, Do you have an older car or special vehicle? you might like to put it on display.
SPECTATORS – If you are not in a position to enter, what about coming along to view the cars on display, watch the competition and talk with the drivers. Entry for spectators is only $15/car load, or $10 if on your own, great value for a day out!

The Events / Dates
May 7th Historic Rob Roy
Promoted by the (VHRR)
August 13th Vintage Rob Roy
Promoted by the (VSCC)
November 19th Historic & Classic Rob Roy
Promoted by the (MGCC)
TRIPLE CUP
The above events form a 3 club (VHRR,VSCC & MGCC) challenge – the Triple Cup. Points are awarded to members of each club based on class placings and event entry. Following the 3 events the club with the most points wins the cup for that year.
Supplementary Regulations
The Supp Regs for the first of these events – May 7th VHRR Historic Rob Roy – are being distributed and are also available at CAMSEventEntry and at robroyhillclimb.com.au
So mark the 7th May, 13th Aug and 19th Nov on your calendar, take the dust covers off your car and come and join in the fun.
Catering
Food and soft drink will be available on site