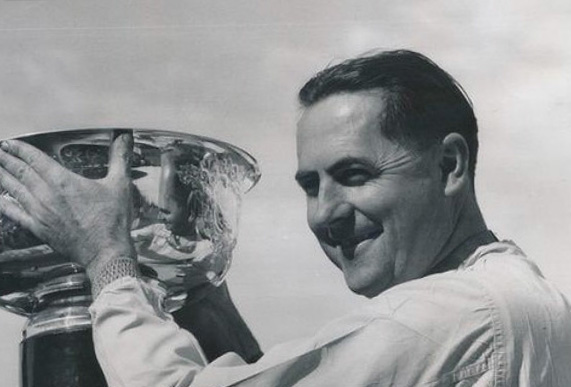 One of Australia’s greatest living treasures, Sir Jack Brabham, has been honoured in two days of celebrations by the Victorian Historic Racing Register.

The well appointed VHRR clubrooms in Lexton Road, Box Hill have been further enhanced by the addition of the Sir Jack Brabham Annex housing his world championship winning Brabham Repco BT19 from 1966, his extensive trophy collection – there were 30 boxes of precious cargo to unpack, polish and display – and a wonderful selection of his books. All have come together in a brilliant display with the triple Formula One world champion on hand for the official launch on November 24-25, 2013.

Accompanied by Lady Margaret, Sir Jack had a very busy schedule as he first unveiled a plaque at the Albert Park Grand Prix circuit, was driven across Melbourne to Box Hill to VHRR headquarters, and then attended a dinner in his honour at the RACV club on Saturday night. The Saturday function was restricted to Repco management and some key members of the host club, and was in a sense a dress rehearsal for the main event on Sunday 25. A highlight was the splendid presentation by Nigel Tait on the development of the mighty Repco V8 engine – (he was a Repco cadet engineer at the time and minder of the car since its racing days).

Jack Brabham’s association with Repco goes back a long way, beginning with those heady speedway days on the cinder tracks of Sydney. Later he carried Repco sponsorship on the side of his Cooper Bristol that landed him in hot water with CAMS, the governing body of motor sport in Australia, and it is said this conflict was a main reason why Jack packed up and went to England to try his hand on the international stage. How fortuitous this proved to be!
Two world championships followed in 1959 and 1960 driving for Cooper, but what then took place was a unique, never-to-be repeated episode in the history of Formula One. In cohort with Repco in Melbourne, Brabham and Ron Taurenac built the all-conquering Repco V8 powered Brabham BT19 that took Jack to his third world title in 1966, the only time a car has ever won the championship bearing the name of its driver. His number two driver, Kiwi Denny Hulme took the title the following year, also in a Repco V8 Brabham.

Described as “the most beautiful racing car in the world”, Sir Jack’s championship winning Brabham Repco BT19 now has centre stage under the custodianship of the VHRR, the club to which Sir Jack is patron.

Before an enthusiastic audience of VHRR members and guests, Sunday’s proceedings featured a Q and A session with Sir Jack, and thanks to the efforts of MC Don Kinsey, a televised message from the Australian Prime Minister, Tony Abbott who spoke in glowing terms of Jack Brabham’s achievements.

Flanked by five of the original Repco team who were instrumental in building the V8 engine, Sir Jack cut the ribbon and the display was officially opened.
VHRR president, Ian Tate was generous in his praise of all who helped bring the display to its successful conclusion, and to John Blanchard, the owner of the building for his ongoing support and interest in the club. He also singled out Bob Harborow for the role he played in developing the annex, and for supplying Maybach 1 for display on the forecourt. Maybach 1 is Australia’s most famous racing ‘special’ and its greatest achievement was winning the 1954 New Zealand GP driven by Stan Jones. It was designed and built in the late 1940s by brilliant Repco engineer Charlie Dean. Bob Harborow then presented a framed print of an early Repco advertisement featuring the mighty Maybach to GPCA Managing Director, John Moller.

An impressive line up of drivers was on hand to help celebrate this special tribute to Australia’s own Sir Jack Brabham, including Gold Star champions John McCormack and Alfredo Costanzo, Reg Hunt, Murray Carter, Alan Hamilton and Fred and Christine Gibson. Ray Gibbs, who worked for Sir Jack in England was keen to re-live old memories, and Norm Beechey and Bryan Thomson sent supportive messages.

The legacy of Australia’s greatest Formula One Grand Prix driver, Sir Jack Brabham is very much to the fore with this latest tribute by the Victorian Historic Racing Register.