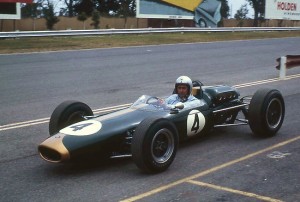 The Victorian Historic Racing Register, organizers of the annual Historic Sandown meeting, will pay tribute to its late patron Sir Jack Brabham on November 8 and 9.

Brabham, Australia’s most celebrated racing driver, died on 19 May this year aged 88 years, and his illustrious career will be celebrated at the 23rd running of this famous meeting with both static and on-track displays of race cars bearing his name.
It will be a fitting reminder that Sir Jack was the only driver to win a world championship in a car of his own manufacture. This never-to-be-repeated feat was achieved in 1966 after he had previously won the titles in 1959 and 1960. In all, Brabham scored 14 Grand Prix victories from his 126 Formula One starts between 1955 and 1970.

Jack Brabham was Australian of the Year in 1966, and received the Order of Australia the following year. He became the first Formula One driver to be knighted for his services to motor sport in 1979. More recently he was proclaimed an Australian National Treasure.

The November 8-9 Historic Sandown meeting will feature some 400 racing, sports and touring cars from the 1920s through to the ‘90s. A cross section of cars ranging from pre-war racers and ‘specials’ through to thundering Formula 5000s and V8 touring cars will contest the 40 events over the two-day program.