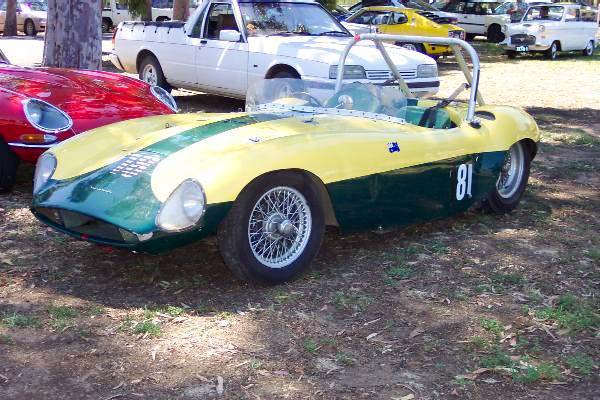 George Snr was a mechanic with extraordinary skills. Apparently- inherited from his father whose first owned a 1913 ADS motorcycle, followed by a 1924 Hupmobile and later a 1936 Oldsmobile 6 in which George Snr., eventually got his drivers licence. George Snr loved motorcycles & frequently competed in scrambles. He used a 1926 Harley Davison 7/9 as transport to travel from the Kerang area to Geelong to visit Frank in college, and two up, it was used as transport to football matches & local dances. There were numerous bikes in both George & Frank’s life and the tradition still continues with both Frank & George Jnr currently owning bikes, including a HRD beautifully restored by George Snr with help from his friend, Phil Irving. The original 1924 Hupmobile restored by George Snr & the recreated 1960 Armstrong 500 winning Vauxhall Cresta, form part of the Coad collections.

Franks first car was a 1924 T Ford, purchased for two shillings at a clearing sale. It was far from complete but with in about a month George Snr had found & fitted a second hand body & a new wooden Ute back. Frank, unlicensed, drove it to Pyramid Hill for registration. It was in this vehicle that he learnt his driving skills whilst performing his farm duties. After obtaining his licence the brothers attended more scrambles and their combined interest increased. In the late 40s George decided to build Frank a car utilising Chev side rails & various Ford components including a 36 V8 motor & gearbox. It had a smart two seater body, no mudguards and poor brakes. It did go quite well & was timed at about 110 -115 mph over a half mile, on a secret road test site. Frank drove it at hill climbs, sprints and club events in Bendigo. That special was traded on a bent MG TC, which George Snr stripped and rebuilt, including the wooden body frame over a few months. George Snr fitted a Wade supercharger, changed the diff ratio & fitted 16 inch wheels. It sounded great at 105mph with its straight out copper exhaust when raced successfully at numerous minor race events.

Offers of assistance by Frank usually resulted in being told by George to go away. “Or something similar”

Georges mechanical skills were widely recognised throughout the Kerang district and in 1954 the family left the farm & and purchased the local Vauxhall franchise. A 23hp Vagabond was purchased & quickly modified by fitting 3 SU carbies, modified cam & Mintex linings, all improving performance. It was entered successfully in many VSCC club events including Altona & Fishermans Bend. Although entered for Albert Park, it was not considered a sports car & the entry rejected.

Both George & Frank had been bitten by the motor racing bug and the story of the Vauxhall Special we know today commences.

Harry Firth, who knew a bit about building cars for motor racing, was commissioned to build the chassis; the welding was to be done by Peter Thomas. George Snr fitted the chassis with the Vagabond motor with a TC gearbox. The rear bodywork was hand beaten aluminium with the front panels taken from a early Austin Healey 100 & modified to suit. Although planned to appear late in 1955 its first outing was at the Albert Park International GP in March 1956 where it ran both weekends with average results. The car ran in this format until Bathurst early in 1958. it dropped a valve. The brothers believed the car was losing its competitive position & as Repco had a beaut new head for Holden grey motors. George undertook a major rebuild including the installation of the Jewett fibreglass body. The Vauxhall Special was most successful during period, with stiff competition from Cooper Jaguar. Maserati 300S, Lotus & Paul England’s Ausca. On one occasion Frank & the Late Doug Whiteford raced wheel to wheel at Phillip Island to establish a joint new sports car record. Frank’s ability resulted in invitations to drive other peoples cars such as Len Lukey’s Cooper Bristol. Deryk Jolly’s Decca Special, Lotus Seven & Lotus 15, to name a few.

This car, the Vauxhall Special Type 2 & is basically the car that is campaigned in events by George Jnr & daughter Johanne today.

The car had been sold in 1960 to Jim McKeown who raced it successfully before selling it to Allen Newton & later to other owners until it was crashed in Gippsland & subsequently virtually stripped. The Vauxhall Special had gone and in 1960 Frank & John Roxburgh drove the Cheney entered Vauxhall Cresta to win the first Armstrong 500. Frank was awarded the KLG trophy for the best performance by a LCCA member. More car preparation by George Snr, & in the 1961 500, in yet another Vauxhall, this time a Velox. John Roxburgh had a lose, costing the team 11 minutes & they eventually finished third behind Harry Firth & David McKay.

Frank was to find the sad & sorry remains of the original Special in 1975. Frank purchased it, loaded on a trailer & returned it to George Snr in Kerang. This, seemingly impossible, part time restoration took 5 years. Two other restorations were completed during this same period and the Special eventually reappeared at Winton in mid 1980 just two months before George Snr passed away.

The Special was only used occasionally until 1993 when it was taken from the shed, the body removed & once again tidied up and again Frank had occasional drives including one outing at the Australian Grand Prix in Adelaide where he came to an abrupt stop, nearly exiting the car & receiving some decent bruises. He had never done anything like that before.

Meanwhile George Jnr was learning to drive the Special safely & gained his competition licence in 1997 & has enjoyed the use of the car ever since. In early 2000 George asked daughter Joanne if she would like to attend the Eddington Sprints, to which she replied. YES. So like Grandfather. Uncle Frank and father George it was out to the paddocks to learn car control & the skills required for competition, such as starts, double clutching, drifting etc. She progressed to the Special & found things vastly different to the paddock car. With her first taste of competition & the associated nerves gone she really loves driving the car. Joanne has had successes in the Special & nowadays driving at events, whether in Victoria or South Australia in open or club events, is shared by father & daughter. And there are discussions as to who is quickest.

George & daughter Joanne together hope to continue in the sport to maintain the family traditions.