The Phillip Island Classic ‘Festival of Motorsport’ historic racing over the long weekend in March is shaping up to be highly competitive with many past champions and legends of the sport competing in classic cars of yesteryear.

In the JK, LB and Invitation events close racing is expected with Nick McDonald in the Repco Holden, David Reid in the Faux Pas and Andrew Makin in his first outing in the Nalla Special. Also racing in this class are two highly competitive ladies with Samantha Dymond, winner of the 2019 Diana Davison Ladies Trophy in the VHRR Club Championship, in the Lola Mk.1. against Elisabeth Bailey from NSW, racing the GAS Formula Vee plus some eight other Formula Vee’s.

Within MO and Invitation Racing, two-times Bathurst 1000 winner, John Bowe will drive Peter Strauss’s Formula1 BT31 (ex Jack Brabham), Laurie Bennett will be in the Elfin 600B, Sean Whelan in the BT30 Brabham, Andrew Robins and Andrew Robson in BT30 Brabham’s and the hard charging Penrite BT16 Brabham will be driven by Keith Simpson. Of great interest will be the competition between Nick Bennett in the Elfin 600 and his father Laurie.

Historic Touring Car racing will feature Western Australian Paul Stubber who has just returned from the USA after competing in 40 race meetings. He will be driving his very fast 1969 Camaro against local legend John Mann in his 1969 Camaro. Also in the category are the fast Torana XU1’s of Andrew Williams, Daniel Van Stockrom and Garry Edwards.

Amongst Group C & A are three of the fastest Group A Ford Sierra cars in Australia driven by Bryan Sala, Chris Stillwell and Metodia (Tony) Karanfilovski who will be challenged by four-time Bathurst 1000 winner Greg Murphy in his first full historic race meeting. Greg will be at the wheel of Peter Sturgeon’s M3 BMW. Bathurst legend Charlie O’Brien will race a 365 CSI BMW, seven-times Bathurst 1000 winner Jim Richards will drive the JPS 635 CSI BMW. The crowd will also be treated to the sound and spectacle of two Jaguar XJS V12 cars of Mike Roddy and Anthony Pallas.

Under the historic Q & R category the fastest historic sports car in Australia, the McLaren M8F 8000cc 850BHP will be driven by young Harrison Jones from Queensland and he will be challenged by the two Porsche cars of Russell Kempnich (956c) and George Nakas (962). Also under this category there are 10 Sports 2000 racing.

Tom Tweedie in the Chevron Formula 5000, Guido Belgiorno-Netti in the1985 Ferrari 156/85 and Ian Ross in the Formula 1 Lola will be strongly challenged by five Formula A cars driven by Andrew McInnes, Geoff Doulman, Luke Doidge, Rohan Carrig and Ben Terbutt. Also in this category is the Indy Car, March 86C driven by Ian Buddery and of special interest will be the Kaditcha AF2 driven by Malcolm Oastler.

Seven overseas drivers including Adrian Reynard – UK, Richard Tarling – UK, Xavier Michel – France, Chris Hodgen – UK, Donald Boyack – UK Martin Whitlock – UK and Jaap Blijleven – Netherlands will race against the best in Australia to provide a spectacular weekend of historic motorsport at the Phillip Island Classic ‘Festival of Motorsport’, an event internationally recognised as one of the best in the world. 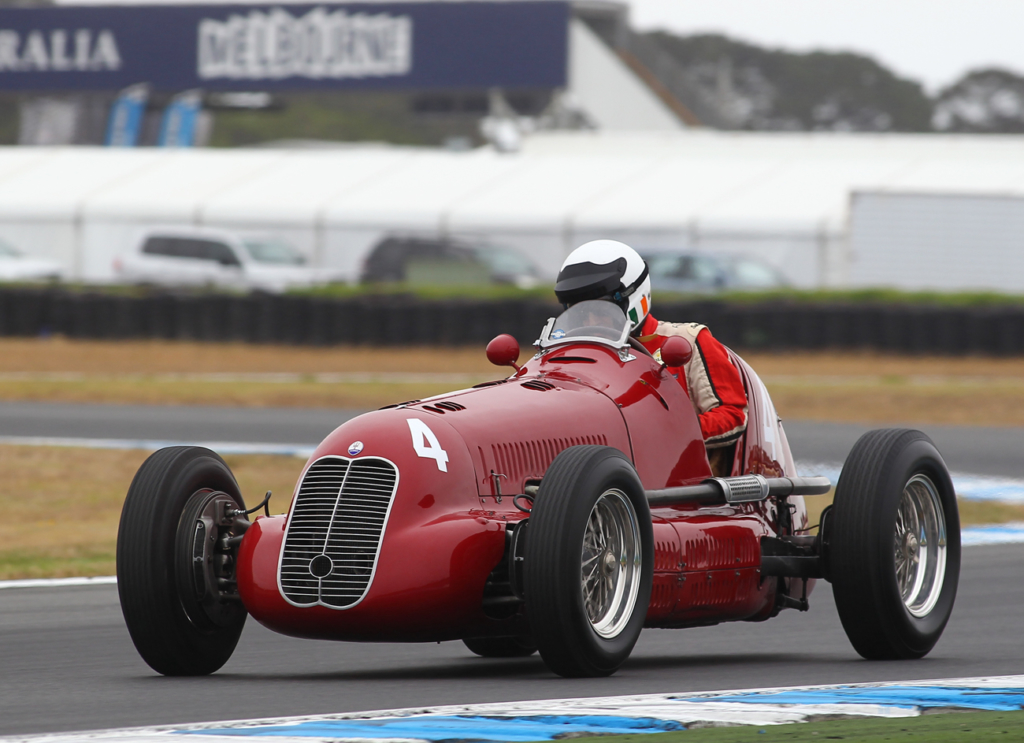 The Phillip Island Classic ‘Festival of Motorsport’ will once again have upwards of 500 entries featuring cars from every state in Australia plus entries from New Zealand, UK and America for exciting racing over three days 6 – 8 March.

With the strong support of leading automotive parts supplier Burson Auto Parts as naming rights sponsor, long term major sponsors Cooldrive, Penrite and Shannons plus a host of other national and international brands, the Phillip Island Classic enters its 31st year building success upon success.
Internationally recognised, the event has been in the top six in the world on no less than four occasions and is attracting worldwide interest and larger attendance crowds’ year on year.

Of special interest this year will be the UK Chevron B6 Sports Car of Andy Newall, USA Paddins Dowling’s 1939 Maserati 4CL Grand Prix car and the Porsche 356 from USA based Earnest Nagamatsu along with three cars from New Zealand including the JPS BMW 635 which will be driven by another Australian legend, Jim Richards and the famous BMW M3 to be driven by Greg Murphy.

Patron for the 2020 event has been announced as the celebrated Australian motorsport legend Larry Perkins, inaugural European Formula 3 Champion, Touring Car Champion and multiple Bathurst 1000 winner with Peter Brock in 1982 to1984 in the famous Holden Commodore. Larry’s son Jack Perkins will race the fully restored Holden Commodore raced in the 2003 Bathurst event by his father.

The event will celebrate the 60th anniversary of Frank Coad’s win in the Armstrong 500, later to become the Bathurst 1000 and the event will acknowledge the 40th anniversary of Alan Jones World Championship win. Peter Brock will also be remembered, as 2020 represents the 40th anniversary of his first Bathurst win. Super Sprints for 5 litre Touring Cars will also be featured over the race days.
Once again there will be more than 1,000 cars on display with the VHRR receiving overwhelming support from Australian Car Clubs of every marque including the Marcos Car Club, 403 Peugeot and Commodore Car Club.
The VHRR Phillip Island Classic ‘Festival of Motorsport supports a charity each year with special rides around the track and this year all funds raised will go to support ‘The Male Bag Foundation’ headed up by AFL Legend David Parkin.

With children and young people under the age of 18 years admitted free at the gate, it is once again a major family day of motorsport and interest for all ages.

Larry Perkins will be the patron of this years Phillip Island Classic – https://autoaction.com.au/2020/02/08/perkins-patron-of-phillip-island-classic 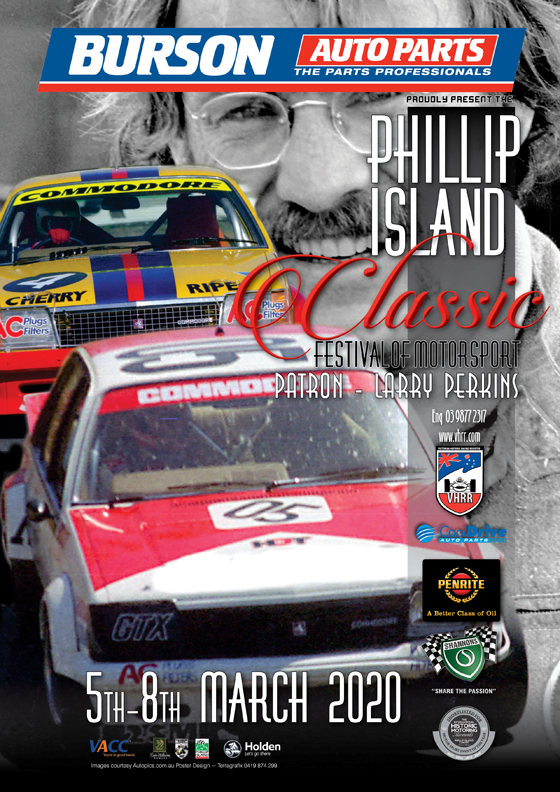 Note* Ticket sales are only available at the gate. There are no Grandstands for this event and tickets do not need to be pre-booked.